(Note:  I’ve been searching for some of my favorite blog posts fro the last year and reprising them if it makes sense.  Since many (most?) of my readers experienced some old-fashioned cold and snow this week, this post from October 4, 2016, seems appropriate.  Happy Christmas! JT)

Spending time writing about winter outdoor activities got me thinking about the real-world adventures my indestructible running buddies and I attempted/found ourselves in the middle of/were stupid enough to try back in the day. Some of these events have never been described or recounted outside our tight little group, but I’m pretty sure the statute of limitations has run out on all of them. Or at least most of them. I think.

The sport was simply named, “Drift-Busting”. Participants in town needed to be 16 and a licensed driver, although many farm kids started building their skills much younger. All you needed was a big US-built four door family sedan from the late 60’s through late 70’s. The early 70’s Chevy Impala and Ford LTD were ideal, although exotica like the “roomy” Plymouth Fury III, Buick LeSabre, Ford Country Sedan station wagon or Ford Ranchero or Chevy El Camino with extra weight over the rear axle added variety.

The ideal crew for Drift Busting included: 1) The Driver; 2) The Navigator, front seat passenger window who was the lookout for other cars and plows, snow-covered obstacles and law enforcement, and 3) An attractive and animated young lady front-seat middle to supply appropriate shrieks, support and laughter such as you might hear on a roller coaster or in a Steve McQueen movie. You went with just Driver/Navigator if circumstances dictated, but the “three wide” configuration was definitely preferred. 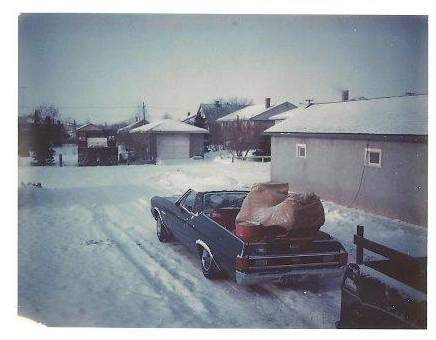 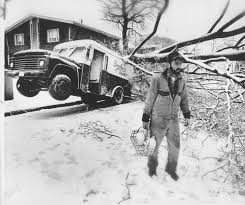 There were three disciplines in Sedan-class Drift Busting. The first was “Classic Drift Busting”, where during or after a big snow ( 6-7inches and up, but more snow and wind is better). you busted unplowed drifts right where God dropped ‘em. “Classic” tested your behind-the-wheel skill to keep from getting stuck or high-centered, and your ability to negotiate a mid-storm corner. The second was “Post-Plow Busting” where you could pick up speed on plowed streets before busting through man-made piles. The heart beat a little faster with this one. The third discipline was “Free-style”, with the car on an unplowed parking lot or playground that was paved and flat, had lots of snow, and fewer things to hit. Free-style tested your artistry with rear-wheel drive V-8 skids, drifting and a set of various consecutive circle-spins and overheated engines referred to collectively as “shitties”.

There were many good Drift-Busters, too many to mention, but as a Navigator my favorite pilot, hands-down, was Thomas P. Harlan. Today Tom is a high-powered lawyer in the Twin Cities, but back then he was a wild-eyed pilot of a classic Dark Olive 1970-ish Chevrolet Impala v-8 equipped four-door sedan. The car was sparsely optioned, but did have a solid AM radio allowing for a long-distance “Boogie Check” with John “Records” Landecker on 89-WLS Chicago. The secret weapon of that car is that it came pre-dented, so when Tom took it home with some fresh dimples no one was the wiser. If you measured pilots solely on driving skill, Tom was well above average but not a savant. His gifts were a total lack of fear, the willingness to thread even the smallest needle, and a happy-go-lucky cackle even in the face of certain disaster. Call it the “Luck of the Irish” if you like.

The demise of the rear-wheeled sedan, improved plowing techniques, fewer monster snow storms and a general distaste for such reckless activities make today’s Drift-Busting the winter equivalent of cock fighting, run by seedy gamblers swilling cheap peppermint schnapps and betting on strung-out adrenaline junkies piloting rusted-out Plymouth K-Cars. But I’ll remember when young princes like Tommy slung around that Detroit iron with a comely lass like Lou Ann Erickson or Susan Arnoldy in the middle, all of us singing “Sultans of Swing” at the top of our lungs, just for the fun of it all.